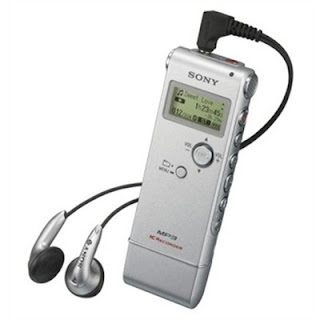 SONY ICD-UX70 IC Recorder is the one I have. I bought this tiny recorder about 2 years ago to record meetings I attended. Most of the times, I recorded the meetings using line-in from the headphone jacks provided at the meeting halls. This device works great on the line-in mode.

On the last Friday, I had a chance to test its microphone at a concert hall. I went to the Daejeon Culture and Arts Center for Mahler No.1 Symphony (often known as "Titan"). My seat was B (5,000 Korean Won) and was on the third floor.

The recording came out great. The sound quality is better than that of 1960's LP. It was amazing that such a small device can record a musical performance at a huge concert hall without any additional technical boost.

I've listened to the recording several times over the weekend. Of course, I wouldn't distribute the recording to any body. :)
I also recorded a conversation between two people who sat in the row right in front of me. I couldn't hear their conversation with my ears, but the recorder caught it.
Raindrop sound wasn't real to me. It was more like poking noise and nothing like the usual sound image I had in mind.