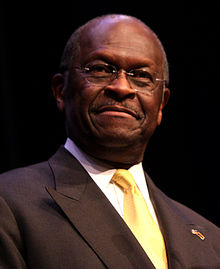 Herman Cain (born December 13, 1945) is an American business executive, syndicated columnist, and radio host from Georgia. He is the former chairman and CEO of Godfather's Pizza and a former chairman (Omaha Branch board 1989-91), deputy chairman (1992-94) and chairman (1995-96) of the board of directors of the Federal Reserve Bank of Kansas City. http://en.wikipedia.org/wiki/Herman_Cain