Jair Bolsonaro sounds like Duterte. Will he take the presidency and becomes Trump of the economically periled Brazil, or in the same manner Duterte of the crime-ridden country? 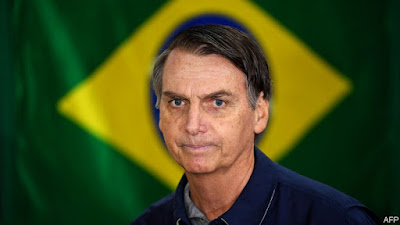 BRAZILIANS FACE an awful choice. One candidate in the presidential run-off on October 28th is Jair Bolsonaro, a seven-term congressman who venerates dictators and guns, goads police to kill suspected criminals, threatens to banish opponents and belittles women, blacks and gays. His rival is Fernando Haddad, the nominee of the leftist Workers’ Party(PT). Its 13 years in power, from 2003 to 2016, ended in a self-inflicted economic depression and revelations that the party encouraged bribery on an unprecedented scale, in part to prolong its hold on power.